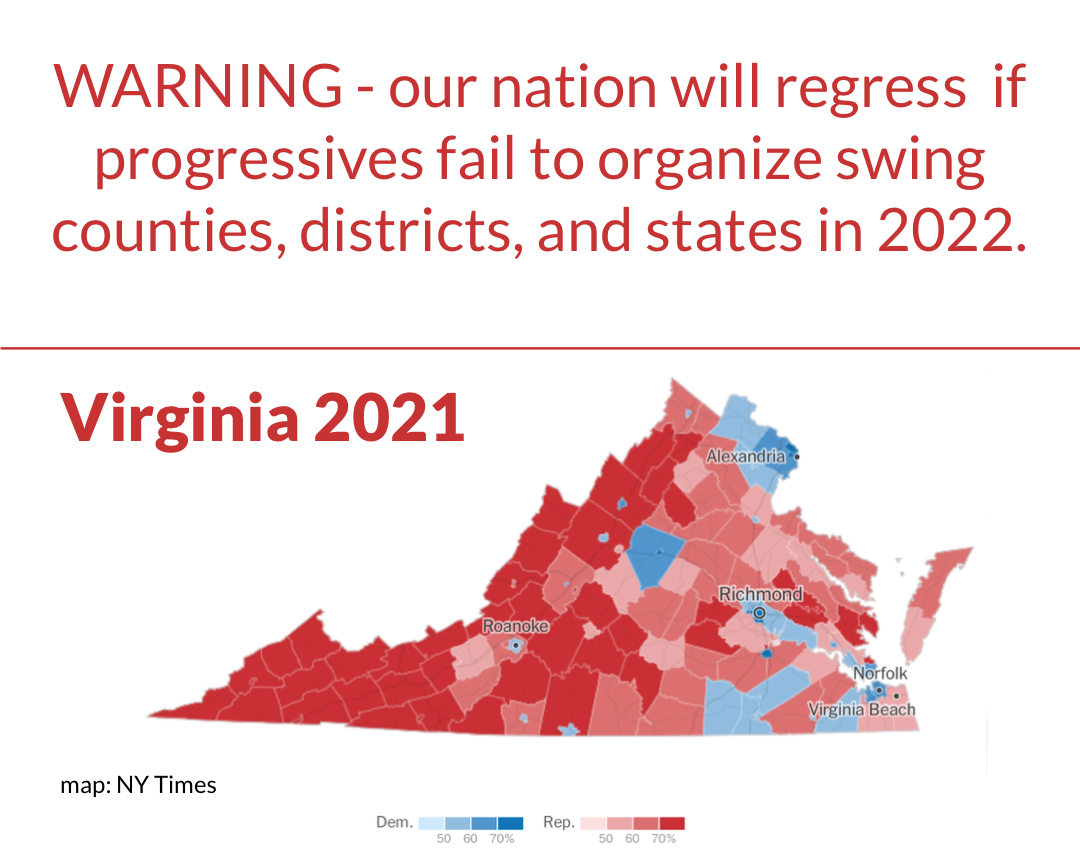 Republican Glenn Youngkin and the Virginia 2021 election show that our nation will regress if progressives fail to organize in swing counties, districts, and states.

Black leaders like Stacey Abrams have shown the way forward in Georgia; voter registration, get out the vote, and accountability of regressive candidates. Would an audit of strategy, funding, and activity of non-profits of the left show alignment to this?

After all the damage done by Trump supporters is the Left finally waging total war on the elected, corporate, wealth, and psuedo-religious enablers of his fascist politics? Nope, we're still wasting time fixating on centrists. In 1930 the leaders of the left in the German KPD party also failed to fight the fascists, because spent their time instead on attacking centrists, until it was too late.

The problem is not US Senator Manchin or centrism. The constitution is clear, consent of the people's states represented by winning senate elections for your policies is required to change laws. We failed to win a US Senate super-majority in 2020 to pass the policies we want. Why?

In 2020 US Senate elections in Maine, Iowa, and North Carolina were lost to regressive candidates by 2-4 %. We needed two more pro-reform US Senators to overcome the objections of Senators Manchin (WV) and Sinema (AZ). Since 2009 too much of the left has wasted time on unviable policies and neglected swing spaces. In 2006 and 2008 we had a left focused on fighting regressives and this removed so many regressives from office they only retained 41 US Senate seats and 23 governorships. Removing regressives from power is historically the key to passing major policies like the New Deal and Great Society.

We need a movement of progressive organizers committed to holding together and growing the 81 million voter coalition of 2020. Presidential approval ratings signal the unity of that coalition is in trouble. That’s what lost VA and is stalling our agenda.

When presidential approval ratings of 52%+ signaled the coalition was strong, we had positive traction toward the $3.5 trillion package. As approval ratings slide below 52%, it signals regressives are more and more likely to win Congress in 2022; which rewards stalling and obstruction.

We are wasting time fixating on Manchin, when we should be punishing pro-Trump US Senate candidates in WI, PA, NC, FL, and OH to the point where they were polling to lose 2022. Instead we are trending to lose 2022, keep wasting time on things that don't remove obstructionists, refuse to admit this waste only helps obstructionists, and expect bargaining power for voting rights, the $3.5 trillion Build Back Better bill, and more.

The filibuster and the US Senate Parliamentarian have protected the New Deal and Great Society when Republicans won Congress. So the 12 months wasted debating the end of the filibuster is another example of how we lose.