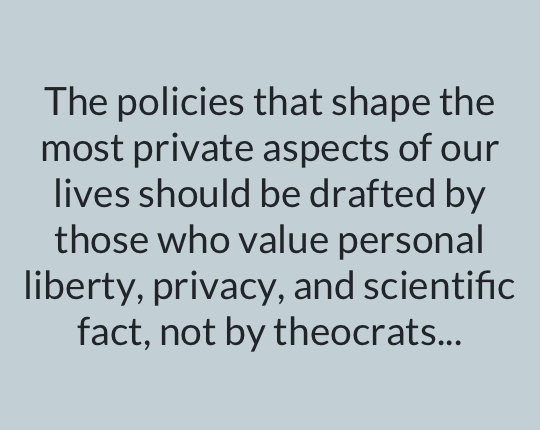 "In the late 1990s, I was a teen girl that had slipped through the cracks of the foster care system, struggling first to survive and to stay in school. There are many things that helped me find housing, work, earn a college degree and achieve success; not least of which was the free contraception provided to me by the state of Colorado. The statistics demonstrate the success of this program, and Colorado was able to cut teen pregnancies in half: but the true benefit of such programs is immeasurable." - Fellow testimony

This experience is not unique: everyone reading this, whether they know it or not, has someone close to them that has benefited from affordable contraception, or who has chosen not to bring a pregnancy to term. Unfortunately, everyone reading this also knows someone who has or will be hurt by a far-right government taking our most basic rights from us, intruding on our most private choices and decisions, and forcing anyone who becomes pregnant to remain pregnant. Countless examples have shown that the best way to reduce unplanned pregnancies (and abortion) is universal access to healthcare and comprehensive sex ed. The fact that this is not the approach taken by the anti-abortion lobby, as well as their blind spot for all the embryos destroyed by fertility clinics on a regular basis, indicates that a cluster of quivering cells could eventually form a heart is not their true concern. They are only interested in controlling our bodies.

The notion that every child should be brought into the world because someone freely chose to carry a fetus to term, rather than by government mandated forced pregnancy isn’t appealing to the authoritarian mindset. The policies that shape the most private aspects of our lives should be drafted by those who value personal liberty, privacy, and scientific fact, not by theocrats who yearn to transform pregnancy and child-rearing into a punishment inflicted on women unable to afford a safe and legal abortion across state lines or overseas.

The foundation of the anti-choice mindset is cruelty and vengeance, not concern for human life and wellbeing. The ‘pregnancy crisis centers’ set up by opponents of reproductive freedom don’t exist to help people struggling with an unplanned pregnancy, nor do they work to ensure all children are cared for, healthy, fed, and educated. Their strategy is to ensure every unwanted pregnancy is brought to term against the pregnant person’s will, and they will use any means necessary to achieve this: including threats, deceit, manipulation, and verbal, mental and/or emotional abuse. If they achieve their goal of a total ban on all abortions, they will likewise do nothing to prevent the unavoidable consequences of their policies: back ally abortions, full-term babies abandoned in dumpsters, spikes in teen suicide and maternal death, countless lives forever upended or destroyed. They draft these policies with the knowledge that their wealth and power will insulate them from these consequences and revel in the fact that the greatest suffering will be inflicted upon the people they hate the most.

Over the course of the recent global pandemic, we have seen that when conservatives are impacted by even the most basic and necessary restrictions on their bodily autonomy, they will cry ‘my body, my choice!’ without the slightest sense of irony. Despite their hackneyed chorus regarding the virtue of small government, today’s far-right reactionary only fights to eliminate any part of the government that doesn’t benefit people like themselves; especially if it could benefit any of the numerous groups of people they hate. In the eyes of a fascist, the only function of government is to favor, empower, and protect the in-group while forcing their morality upon the masses. ‘Freedom for me, not for thee’ is the watchword of today’s conservative, and they will roll back every advance that has benefited marginalized people if we let them.

Getting an abortion is effectively impossible in many US states today, even with the few abortion protections that are still the law of the land. Whether or not Roe v. Wade is upheld, the current Supreme Court has made it clear there is no abortion restriction too strict to be unconstitutional, and the fight for reproductive freedom and bodily autonomy will be left up to the states. If you currently live in a red state, you have a heck of a fight ahead of you. If you live in a blue state, remember that our neighbors stranded in red states are relying on us to help preserve their reproductive rights. Through decades of legal maneuvering and trickery, conservatives have robbed us of our most basic human right, the right to bodily sovereignty. Imagine what harm they can and will do if given total control over the government.