Open Letter To The People 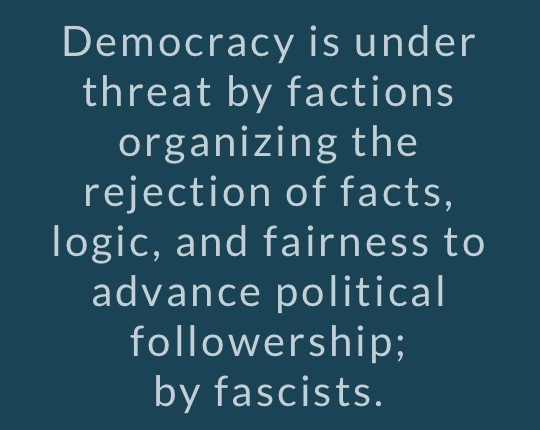 (5 min. read) - There is a kind of political division rising in our society that is poisonous to democracy; because it is harmful to any relationship. In the U.S. a politic of lies, logic fallacies, and unfairness culminated in the January 6th 2021 insurrection at the capitol. If you normalize this kind of behavior in any group, especially when there is too little agreement building and too little accomplishment, people lose faith in the group. Not just the insurrection, but the out of norm politic that lead up to it is how fascists corrode faith in republican governance. The resulting disfunction confuses people about how democracy works. Thankfully, everyday personal experience can help.

Groups need open airing of differences, presentation of plans to address concerns, a vote, and then to work together in support of what the group decided. We know this intimately from working out our differences in friendship, marriage, family, church, work, union, and virtually all spaces of human collaboration. Informal voting helps us settle differences in all these relationships. More importantly, we value consent; we live "consent of the governed" when friends or coworkers build agreement to a course of action. Our cities, states, and nation also depend on settling differences through democratic process. Helping the people make their republic work is especially important now because we face a problem that is toxic to democracy.

Democracy is under threat by factions organizing the rejection of facts, logic, and fairness to advance political followership; by fascists. The dynamic mirrors religious fundamentalism. Years of right-wing political conditioning of tens of millions reached a point where it is easy for them to believe the big lie that Trump only lost the 2020 election because of voter fraud. Repeatedly the courts ruled against his voter fraud lies. This was not an exception, it was the norm: Trump made over 30,000+ documented lies as President. That tens of millions would vote to continue enabling Trump to harm others they dislike is a clear example of how fascism degenerates critical thinking and moral discernment. 47% of Americans voted to keep him in power despite four years of overwhelming evidence of way out of norm unethical conduct. This is especially dangerous because fascist organizing also weaponizes prejudice. Not only do they believe a liar, but they chose to believe the lie that minority communities would betray democracy by conspiring to generate millions of fraudulent votes. That this lie is so widespread among the 47% is an alarming signal of the harm this politic is doing in faith, business, civic, media, elected, and other spaces in our society.

Thankfully, in the 2020 election, a clear majority of Americans opposed this fascist politic. The trouble is that the 47% refuse to acknowledge the harm they have done during the Trump administration. Instead of making it right, they are still advancing candidates that are less blatant and, they hope, more effective versions of Trump. If those of us who are loyal to settling differences by democratic process fail to restore faith in it, there is a real risk fascists will come back stronger. We are in a catastrophic downward spiral of regressive politics winning control of government, wrecking the world, followed by one or two terms of the rest of us only partially cleaning up after them. Unfortunately, instead of continuing to press the attack after winning an election, non-regressives end up so divided again that regressives regain power and continue the spiral. The damage to economics, women, the environment, and oppressed people is clear. The fracturing of non-regressives has to stop. Greater respect for democratic process offers a better way of resolving differences among those of us opposed to regress.

Every four years our society invests a great deal of time and resources in the selection of not just a president, but a platform for governing. This document should serve society like a four-year business plan. Our constitution is clear, you should build agreement among the states for your policy proposals to the point the people elect a majority to Congress and a president in support. If you have not done the work of gaining consent in this way, then you have not earned the support required to change the people’s laws or to govern. There are too many groups that prioritize making demands but neglect organizing the people's representative power; their vote. Advancing the platform requires us to organize in community, hold obstructionists accountable, and win legislative majorities; so we need a movement of organizers committed to that work.

Our society conducts a presidential primary process across all 50 states that all parties can leverage to draw a majority of people to a candidate and platform. It’s important to acknowledge the legitimacy only such a massive democratic process can confer. When too many groups disregard obtaining the consent of the governed, it fundamentally harms our union the same way disregard for consent harms all relationships. Friendship, marriage, family, church, union, city, state, nation are all human relationships that depend on a deep appreciation for the importance of not just what you want, but also for building agreement or consent to a course of action. The national presidential candidate debates reach tens of millions. Tens of thousands of media reports cover a wide diversity of the people’s concerns. Hundreds of millions are spent by campaigns to educate, persuade and mobilize the people’s support on issues through their vote; along with countless volunteer hours. This not only produces tens of millions of votes, but it is also the greatest legitimate delegation of the people's power in our republic. Restoring proper respect and cooperation around this is how we address cancerous infighting. Here is our theory of change:

Great changes in law, like the New Deal and Great Society, only happen when a super majority of the opposition are defeated in Congressional elections; demand tactics are not enough. Even after elections, legislation will stall or shift to the right, if opposition polling is trending to win the next election. The legitimacy of the people's support via elections and polling is paramount. The more organizing of a broad majority coalition is trending to diminish opposition seats in Congress, the more things progress.

Even when progressives win elections, instead of pressing on to other regressive dominated states and districts, infighting begins, polling of regressives to win the next election goes up, elected officials in vulnerable districts get scared, and legislation slows or stops. For Progress is dedicated to helping the largest non-regressive multi-party voter coalition in our republic move their platform and democratic process forward; year after year until every state is liberated from regressive politics. In the last presidential election, 81 million came together in support of a wide variety of vital issues. For Progress helps with planning, training, and campaigns that integrate the organizing of the people's community, law-making, and representative power. Defending democracy is not just the responsibility of grassroots groups but all non-profits, media, business, and faith groups. Just as civic groups benefit when they help the people, so should all groups. We hope to be in touch soon so we can explore how causes you care about and organizations you work with can thrive by advancing the people’s platform.