An Open Letter to The People 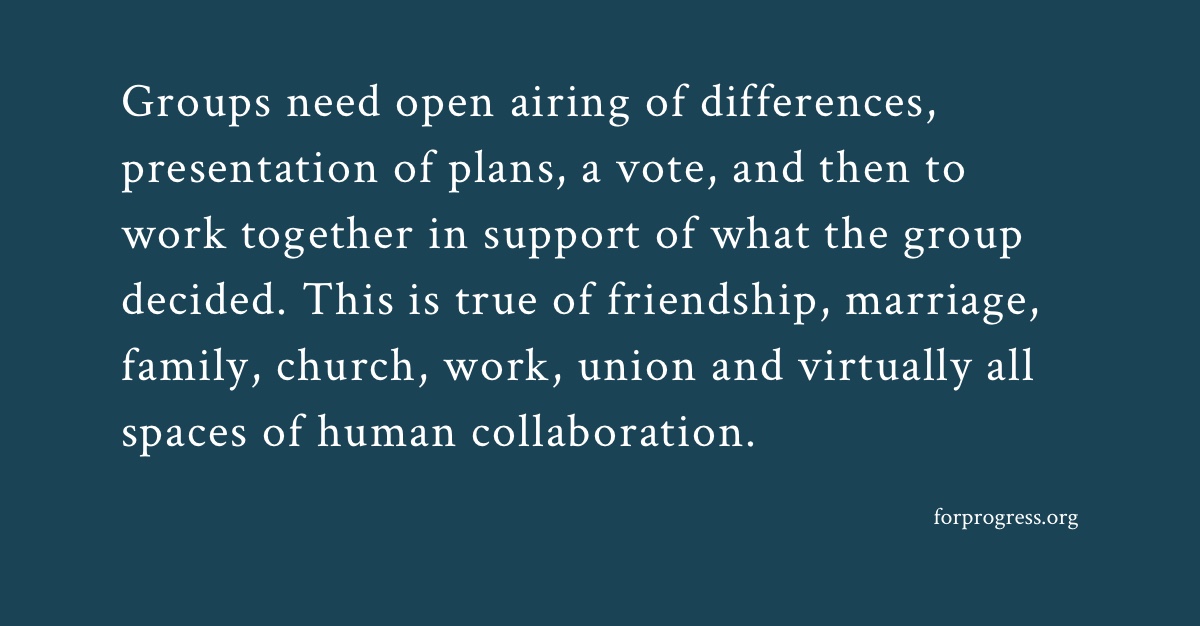 There is so much division in our society, so much trouble making democracy work. This is not just undermining progress, it is dragging down belief in republican governance itself. Like other relationships, if there is too much arguing in a group and too little agreement building and accomplishment, people lose faith in it. Things in our nation are getting worse because we are out of touch with how we settle differences by democratic process.

Groups need open airing of differences, presentation of plans, a vote, and then to work together in support of what the group decided. This is true of friendship, marriage, family, church, work, union and virtually all spaces of human collaboration. Our cities, states, and nation also depend on the settlement of differences by democratic process. It’s important for grassroots, non-profit, legislative, candidate, media, business, and faith organizing to help society appreciate and practice this.

The need to make republican governance work is especially urgent because of the growth of factions dedicated to the rejection of facts, logic, and fairness for the sake of political followership; power by fascism. Even after the recent attacks on the Capitol, 25% of the population still support the 45th president. What is even worse is that 47% voted to keep enabling this president despite four years of overwhelming evidence of how unethical it is to support him. This is a massive problem that needs dedicated intersectional organizing. For Progress is the first group to propose that the best way to confront this challenge is unity under the platform selected by the largest coalition of voters opposed to regress.

Every four years our society invests a great deal of time and resources in the selection of not just a president, but a platform for governing. A platform selected by the greatest coalition of voters opposed to regress should serve society like a four year business plan. Sadly, there are many groups putting their agendas above what the people have given their consent for. Our constitution is clear, you should build agreement among the states for change to the point the people elect a majority to congress and a president in support. If you have not done the work of gaining consent in this way, then you don’t deserve to change the people’s laws or to govern the people. This understanding of republican governance is key to addressing needless division among those of us who are for progress.

Our society conducts a presidential primary process across all 50 states that all parties can leverage to draw a majority of people to a candidate and platform. It’s important to acknowledge the legitimacy only such a massive democratic process can confer, because when too many groups disregard obtaining consent of the governed, it fundamentally harms our union. Friendship, marriage, family, church, union, city, state, nation are all human relationships that depend a deep appreciation for the importance of not just what you want, but also others; and then building agreement to a course of action or consent. The national candidate debates reach tens of millions. Tens of thousands of media reports cover a wide diversity of the people’s concerns. Hundreds of millions are spent by campaigns to persuade and mobilize the people’s support through their vote; along with countless volunteer hours. This not only produces tens of millions of votes, it is the greatest delegation of legitimate power and mandate in our republic.

For Progress is dedicated to helping the largest non-regressive multi-party voter coalition move their platform forward. Just as grassroots groups flourish when they support what the community needs, so too should non-profit, candidate, media, business, and faith groups that do the same. In the last presidential election 81.2 million came together in support of a wide variety of issues that impact all these vital sectors. We hope to be in touch soon so we can work together to help you and our republic thrive together.